We live in a culture rich with images. My generation (Boomers) grew up with television – maybe only 3 channels, but what a difference from our parents’ primary information – the radio and the spoken word only.

My kids (2 Gen X, 5 Gen Y) expanded on the basic television, first with cable, then videotapes, then the Internet, and then DVDs.

My 4 grandchildren? They are digital natives, taking visual communication to new – and participatory – levels with social media, smart phones, tablets, apps, streaming video of all types on many different devices, and who knows what’s around the corner.

We can’t escape the power of the visual image – and most of us don’t want to.

Most of us are visual learners. We like to see a picture, not just hear a word. Len Sweet has said that images are the language of the 21st Century, not words. Why?

We see with our brain.

Vision trumps all the senses. Half of the brain’s resources are dedicated to seeing and interpreting what we see. What our eyes physically perceive is only one part of the story. The images coming into our brain are changed and interpreted. So it’s really our brains that are “seeing.”

If we are on an increasing visual trend in our culture and we understand the importance of vision in our lives, then it follows that leaders should be leading the visual revolution, not just observing (pun intended) it.

With that in mind, I wanted to introduce you to a trio of resources that will help you know how to use visual tools, manage visual practitioners and their work, and understand how to help your entire organization be visually literate – especially if you don’t think of yourself as being skillful visually. 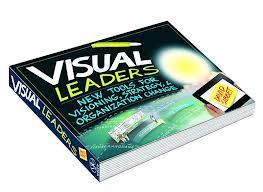 Visual Leaders will help you and your organization take advantage of the visualization revolution. Visualization is transforming the world of work and the role of leaders in an age of global communication and complexity. The book is a guide to increasing your own visual literacy and your ability to help others with theirs. (Download a free summary of this book here.) 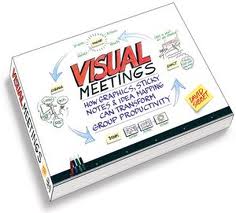 Visual Meetings supports a group’s cycle of learning. Visual Meetings explains how you can use graphic recording, sticky notes, and idea mapping when imagining, engaging, thinking, or enacting in meetings. It is loaded with very practical and detailed descriptions of how to conduct different visualization activities. It also reviews the Group Graphics Keyboard and the seven archetypal choices for organizing displays. 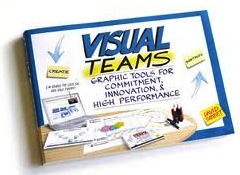 Visual Teams explains how to create and sustain team performance with visuals. Visual Teams builds on Visual Meetings and shows how to use these methods across the whole arc of a team process, including the parts in between meetings. It also provides a graphical user interface to thinking about team dynamics with the Team Performance Model. The seven challenges of high-performing teams are explained in detail and linked to tools that help meet them.

According to author Dan Roam (The Napkin Academy) there are three kinds of visual thinkers:

Hand me the pen! Black pen people show no hesitation in putting the first marks on an empty page. They come across as immediate believers in the power of pictures as a problem-solving tool, and have little concern about their drawing skills – regardless of how primitive their illustrations may turn out to be. They jump at the chance to approach the whiteboard and draw images to describe what they’re thinking. They enjoy visual metaphors and analogies for their ideas, and show great confidence in drawing simple images, both to summarize their ideas and then help work through those ideas.

I can’t draw, but… Yellow Pen people (or highlighters) are often very good at identifying the most important or interesting aspects of what someone else has drawn. These are the people who are happy to watch someone else working at the whiteboard – and after a few minutes will begin to make insightful comments – but who need to be gently prodded to stand and approach the board in order to add to it. Once at the board and with pen tentatively in hand, they always begin by saying “I can’t draw, but…” and then proceed to create conceptual masterworks. These people tend to be more verbal, usually incorporate more words and labels into their sketches, and are more likely to make comparisons to ideas that require supporting verbal descriptions.

I’m not visual Red Pen people are those least comfortable with the use of pictures in a problem-solving context – at least at first. They tend to be quiet while others are sketching away, and when they can be coaxed to comment, most often initially suggest a minor corrections of something already there. Quite often, the Red Pens have the most detailed grasp of the problem at hand – they just need to be coaxed into sharing it. When many images and ideas have been captured on the whiteboard, the Red Pen people will finally take a deep breath, reluctantly pick up the pen, and move to the board – where they redraw everything, often coming up with the clearest picture of them all.

Roam’s conclusion of these different types of people?

Regardless of visual thinking confidence or pen-color preference, everybody already has good visual thinking skills, and everybody can easily improve those skills. Visual thinking is an extraordinarily powerful way to solve problems, and though it may appear to be something new, the fact is that we already know how to do it.

What color is your pen?