Storytelling is probably the oldest form of communication. John Hench, Disney Legend and former Senior VP of Creative Development, used to insist that storytelling was ‘in our genes.’ – Tom Fitzgerald, The Imagineering Workout

Storytelling has played a vital role in our survival – allowing us to share information, knowledge, and values from generation to generation. Story is the medium through which we receive our early learning as to right and wrong, good versus evil, reward and punishment, social values, etc.

We respond to storytelling. It engages our attention; no matter how old we get, who doesn’t love a good story?

Understanding this, Walt Disney created a technique in the early days of his cartoon films that helped illustrate the flow and continuity of stories – the storyboard. 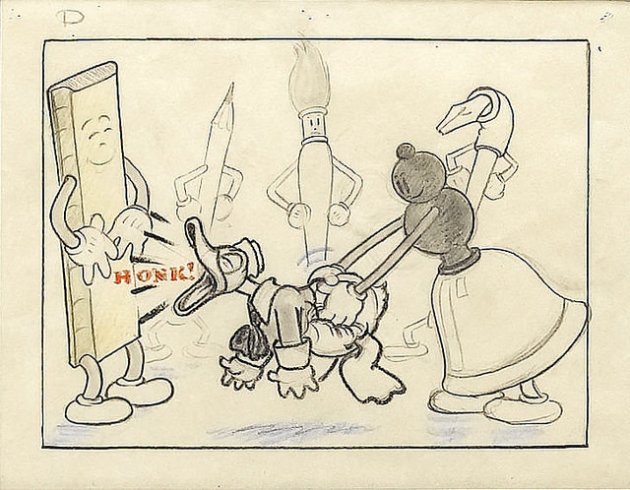 Storyboards are tools that allowed Walt and his artists to envision a film prior to production. It allowed his team to have a shared vision of the story they were telling and how it would unfold. As a bonus to driving the creative development, it also offered a cost-effective way to experiment with a film early on, so that when production began, costs could be minimized.

Decades later, the tradition of storyboards continues on, though it has long expanded past just films. At Walt Disney Imagineering, rides, shows, and films for Disney’s theme parks around the world are the objects of regular storyboarding.

Starting with brainstorm sessions, the Imagineer’s first thoughts, ideas, images, and feelings about the story they are creating are captured on note cards and quick sketches.

The storyboards are worked, re-worked, rearranged, and edited until the story is strong and clear. Only then will production proceed.

At Walt Disney Imagineering, everything they do revolves around the story – and storyboards have remained an essential tool in helping them tell the story.

What story are you trying to tell?

Let it start with words and images to single note cards pinned on wall. Step back and look at the story you are trying to tell. Rearrange, edit, and add to the cards. Work at it – hard – until the story is just like you want to tell it.

written by The Disney Imagineers

An exceptional concept depends on good process as well as pure inspiration.

One of my favorite shows at Walt Disney World’s Magic Kingdom is Mickey’s PhilharMagic. In the image below, notice the music notes in the background circling around the showcases in the gift shop at the exit from the theater. They’re not random. If you hum them, you will get the opening to Paul Dukas’ The Sorcerer’s Apprentice – one of the most memorable sights and sounds from Disney’s Fantasia, and the core idea in Mickey’s PhilharMagic. 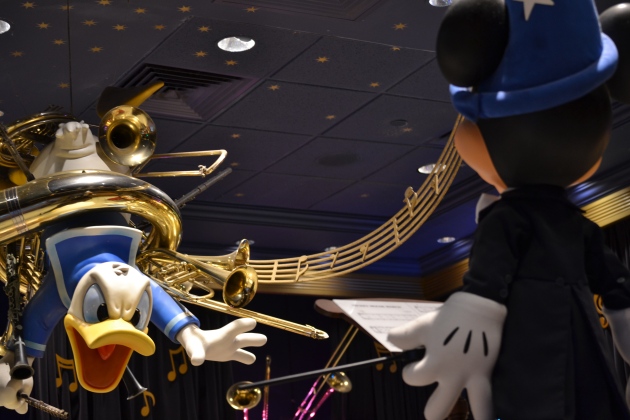 That’s the magic that “Process Practice” can produce!

Being aware of the design process and knowing what phase the team and the idea are in is a big part of the show producer’s job. You probably aren’t a producer, but all leaders have a role in pulling various people and resources together in creating something – which is the role of a producer.

Inspiration generates ideas, and the process helps to shape efforts in a way to keep the team moving towards a fully developed idea.

If everyone is comfortable with the process, the team members have the freedom to generate the best ideas for their project.

The word inspire means “to breathe into or upon; to infuse with life by breathing.” When we say, “I am inspired,” it has a deeper significance than we think. We are “breathing in” the living environment of ideas, enthusiasm, and energy that comes with the creative process.

In fact even in English our word “spirit” comes from Latin word meaning breath. “Inspiration” and “respiration” have the same root. This is no mistake. From the earliest times people could see the connection between breath and active life. When a person’s body stops breathing, it also becomes inactive and dies. Breath is the outward manifestation of activity and life. This intimate connection between breath and active life is the reason why the same word is used for both “spirit” and “breath” in Hebrew (ruach) and in Greek (pneuma).

Inspiration comes from things that are infused with life.

In creating, Disney’s Imagineers always work from a basis of their training, exposure to others’ work, their research, and their life experience.  Working together, they are inspired by their collective histories, training, experience, predecessors, and mentors.

When we are inspired, ideas that are living inside us will find a way to be expressed.

Here’s an exercise from the Imagineers: Select a creative challenge – painting, writing, inventing – anything that requires creativity. Now, make a list of creative souls that could inspire a solution: artists, scientists, inventors, musicians, writers. Select one or more people from the list, reflect on their talent, research their work, and let them breathe life into your thinking and imagination.

Now, find your own answers by letting your imagination soar with multiple solutions.

But Disney’s Imagineers dream and do.

Since 1952, the Walt Disney Imagineers have been turning impossible dreams and schemes into magical rides, shows, and attractions for Disney theme parks around the world.

What is their magic?

It’s all about making the ordinary extraordinary.

Take this building in Hollywood Studios, for instance… 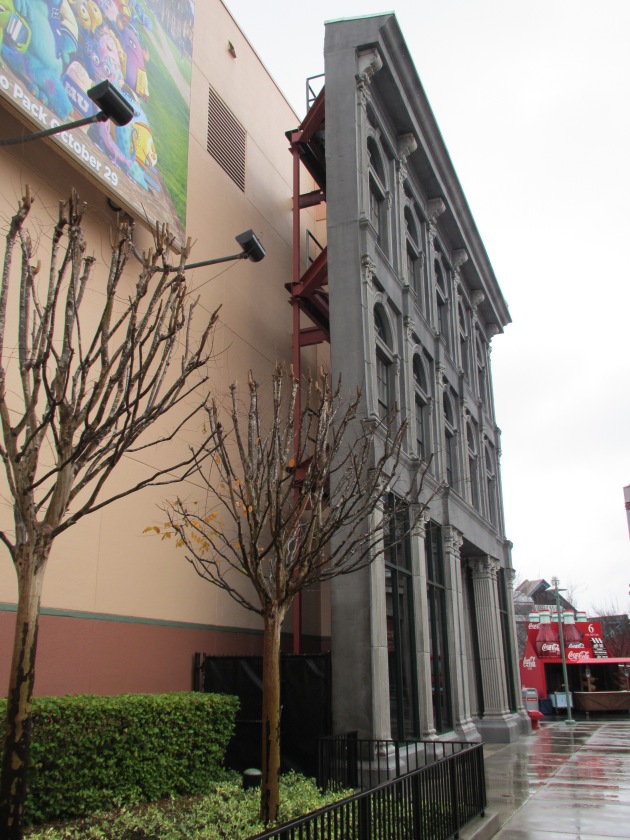 It’s really just a facade – an excellent example of how the Imagineers use a combination of imagination and engineering to make magic come to life at Disney.

Disney’s Imagineers are a highly creative group – one that isn’t slowed down by the impossible.

There are hundreds of stories about Imagineers who didn’t realize what they were capable of until they started doing it. They don’t want your fear of taking the first step get the best of you – they want to let your project get the best of you.

Imagineers try and fail and keep trying until they make magic.

Isn’t it time you got started?

Go ahead. Tackle that creative challenge head-on. Allow the spark of an idea to ignite your creativity and passion. Make the ordinary, extraordinary.

Don’t just sit there – dream and do!

inspired by and adapted from The Imagineering Workout, by the Disney Imagineers

Working from the back-end is finding the lessons that you don’t want to learn in the midst of your project.

This practice of back-end visualization is essential to almost everything we do and can be adapted to any project.

Next, consider how you could minimize these challenges so they do not negatively impact the project, and take necessary preventive action. This might be done through a contract, through people you might hire, materials you might use, or by adjusting a schedule.

Imagine all the reasonably possible outcomes of the project, select one that best meets your needs, think through all things that could delay, detour, or diminish your outcome and write them down.

Anticipating the possible outcomes of everyday decisions before you make them helps you avoid calamities, not to mention inconveniences.

It takes a special kind of vision to see the end before the beginning.

“Of course he did,” recounted his wife Lillian. “If he had not seen it then, we would not be seeing it now.”

After being around Disney cast members for several days this week, the story of people lamenting the fact that Walt died before Walt Disney World was built was recounted several times.

Being onsite at a Disney theme park always heightens my awareness of Walt Disney and the vision he had to bring so much to our world – groundbreaking animation, the concept of the storyboard creative process, live action/animation  movies, and especially the concept of theme parks.

A celebration of National Backwards Day

Start with a question to discover if there is an opportunity for creativity.

Questions start the creative process by asking how, why, and in what other way can something be done. The answers you get will explore options that kick off creativity.

The most unrealistic options inspire tangent ideas that take you to new places you would never have considered.

Once you have the basic questions to ask, it’s time to add questions that are specific to your challenge. Review your list of questions with others and ask them to help develop additional questions.

Now for a critical step in the creative process:

As you continue to develop your ideas, you need to constantly question and challenge your assumptions.

As you answer the questions and narrow down your assumptions, it’s most likely that you are ready to solve the problem.

Everyone is talented – it’s natural to us.

Watching my 2 ½ year old granddaughter over the course of the last week has reminded me of that. I’ll see another expression of it this weekend at my grandson’s 5th birthday party – all about dragons! And even in the curious eyes of his 4 month old sister – her expressions are just waiting to blossom.

As the parent of 4 children, I think I knew that at one time – but the youngest is now 20, and those kinds of memories tend to fade…

It took the exuberance of my granddaughter and a special focus on children at my church last Sunday to remind me of the truth in the title above.

The reality is that everyone is talented. It’s very evident in watching and listening as a young child learns to talk.  Language is a creative tool from the first words we speak to mastering the art of storytelling.

Then there’s the fridge art, the bathtub crayons, and the sidewalk chalk masterpieces – all reminding us of the evidence of emerging ability.

Talent isn’t just the ability to paint a portrait, compose a symphony, or sculpt a statue – it’ about the possible.

A creative mind is always working.

Where and how it gets expressed is your choice.

A new world is waiting for your creative mind and talent, so make a choice: Focus on the abilities that come naturally to you and make things possible.