Thomas Edison was the most outstanding figure in an era marked by an extraordinary confluence of American innovation – including the work of Alexander Graham Bell, Henry Ford, George Eastman, Harvey Firestone, John D. Rockefeller, George Westinghouse, and Andrew Carnegie – that accelerated America’s leadership in global business.

Edison understood that innovation is much more than invention. Through the establishment of his two extraordinary laboratories at Menlo Park and West Orange, NJ, Edison drove innovation on many levels, including strategic technological, product/service, process, and design innovations.

How did Edison excel in so many different kinds of innovation? 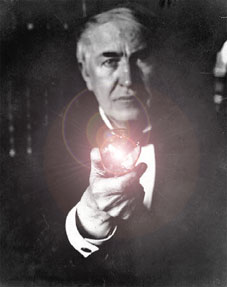 Innovate Like Edison presents Thomas Edison’s essential approach to innovation success. His approach is based on what authors Michael Gelb and Sarah Miller Caldicott call The Five Competencies of Innovation. The five competencies are comprised of a total of twenty-five elements – building blocks – that support them.

The five competencies and twenty-five elements represent a core curriculum for you to achieve innovation literacy. If you are new to innovation, there’s no better way to get started on the journey. Innovate Like Edison is a guidebook enabling you to thrive in a world that increasingly rewards efforts. Ready to start classes?

As you scan the 5 Competencies and 25 Elements above, consider how you might apply them to your most important innovation challenges. Think about questions like:

A multi-part series being reposted in honor of Thomas Edison’s birth February 11, 1847

How do you define collaboration?

What made Thomas Edison so successful in creating collaborative innovation teams in his era? Sarah Miller Caldicott brings Edison’s collaboration approach to the 21st century in her new book Midnight Lunch.  Read step-by-step how Edison used collaboration to propel his teams to share their ideas in a uniquely collegial atmosphere, creating a competitive edge which became a hallmark of his laboratories.

Here’s a quick overview of the four-step process.

Build diverse teams of two to eight people.
What worked for Edison: To create the lightbulb, Edison’s team had to include chemists, mathematicians, and glassblowers.
Modern counterpart: Facebook’s small, collaborative coding teams.

After a mistake, step back and learn from it.
What worked for Edison: At age 22, he had his first flop–the electronic vote recorder, which legislators failed to adopt. From there, he changed his focus to the consumer.
Modern counterpart: At Microsoft, Bill Gates took intensive reading vacations each year.

When team members disagree, step in and make a decision.
What worked for Edison: Groundbreaking work in electricity isn’t easy to come by. Fights and frustration followed; overarching vision kept creation on track.
Modern counterpart: Whirlpool has “collaboration teams” to spark dialogue between departments.

When the market shifts, change your direction–or face the consequences.
What worked for Edison: It was the era of electricity. Inventors ignored that at their peril.
Modern counterpart: The implosion of Kodak, which failed to adapt to market changes.

What could your team learn from a “midnight lunch?”

Get the book here.