Pizza may not fit your definition of comfort food, but it comes close in our family.

A semi-tradition for many years in our family has been Friday Night Pizza and a movie, usually consisting of whatever local pizza store (almost always one of the national chains) had the best deal going on. On the same trip, we would go by the video store and pick up a DVD to watch.

Netflix and then Amazon Prime changed part of the equation, but the pizza part remained intact.

As the years went by and our family dwindled, pretty soon it was just Anita and I – functional empty nesters, as our youngest son was a full-time culinary student and worked in a restaurant, or was out with friends. Along with that change came a realization that there were a lot of pizza restaurants in and around Charlotte – 371 by my count on Urban Spoon in 2011. I pondered (and my wife Anita humored me): what if we go out for pizza on Friday nights, and try a different place every time? 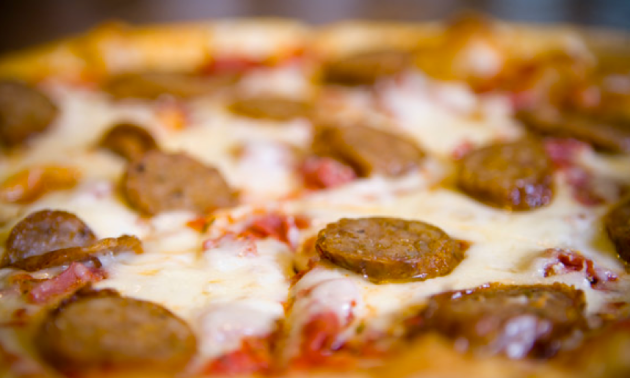 I lead the Adams Family Pizza Quest, a weekly pursuit of the quintessential pizza. My family and I  (well, mostly me; the rest just humor me) utilize a 5-slice rating system that measures menu selection, crust, base ingredients, toppings, overall pizza goodness and ambiance of the restaurant. I actually have a nerd version that has 35 points, but after a round of boos and garlic knots thrown in my direction I hastily retired it.

After almost three years of weekly excursions, only 1 pizza has earned 5 slices. That would be The Sicilian – Red sauce, sausage, cappicola, salami, oregano, basil, pecorino-romano and fontina – accompanied by an Italian Chopped Salad, from WaterStone Wood Fired Pizza in Lynchburg, VA. Anita and I stumbled on it by accident, walking downtown along the river.

Several others have earned 4 1/2 slices, many have earned 4, and a lot have earned 3. We’ve only encountered a few 2 slices, and in all honestly, not a single 1 slice rating (maybe we just naturally steered away from those joints).

Our favorite local pizza place is Zio’s Casual Italian off Providence Road. It was one of our early discoveries, earning a strong 4 3/4 slices; somehow we have found our way back there several times, taking friends who haven’t heard of it.

I could go on, but I won’t, as the Adams Family Pizza Quest comes to a close (sort of). After over 100 different visits in the greater Charlotte area, and a few across the country, my sense of adventure for pursuing the perfect pie has waned. Mind you, my taste for pizza hasn’t – I’m sure we will still be eating pizza on a regular basis.

But, it’s a new year, and time for new adventures.