If you are comfortable where you are, or if things are okay as they are, you wouldn’t go through transformation.

Only when the pain of changing things overcomes the pain of status quo would you ever consider transformation.

That’s where Starbucks found itself in early 2008. Chronicled in CEO Howard Schultz’s 2011 book Onward, Starbucks – at the apparent height of its success – was declining inwardly, and on the edge of declining outwardly. Onward details the transformation Starbucks went through in 2008-2010, utilizing a Transformation Agenda developed by the senior leadership team at Starbucks as the primary guide.

12,000 partner positions eliminated in these stores.

Schultz called it the most painful decision he has ever made. Only the certainty that closing the stores would keep Starbucks operational in the long run allowed him to make the decision. He understood the reasoning, but it was impossible to take the emotion out of the equation:

For all the flak about Starbucks’ ubiquity, almost every store maintained a devoted following inside and out. A soul. With each closing, we would be erasing a fingerprint, and that was a reality I could not possibly ignore.

Fast forward to the fall of 2010: Starbucks regained a healthy balance with a culture that celebrates creativity and discipline, entrepreneurship and process, as well as rigorous innovation. Their fiscal 2010 operating margin was the highest consolidated one in their 40-year history. The transformation worked.

But according to Schultz,

…perhaps the most valuable thing that came out of the two-year transformation was the confidence we gained knowing that we could preserve our values despite the hardships we faced. Holding fast to those values steadied us throughout the tumultuous journey, and the ways in which we conduct our business will continue to bring our partners pride and fuel their engagement as we continue to grow.

Success is not sustainable if it’s defined by how big you become. Large numbers are not what matter. The only number that matters is “one.” 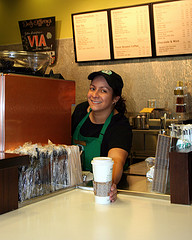 One experience at a time.

an updated post from a series reviewing Onward, by Howard Shultz

preparation for a new series coming soon on Leading the Starbucks Way, by Joseph Michelli