The chemical and pharmaceutical industries have given us drugs for everything under the sun. You might be surprised to learn, however, that there’s a drug that could make you more persuadable if you take it and make you more persuasive if you give it to others. Perhaps even more shocking is the fact that this drug is now widely available through “trimeth labs” that are popping up in neighborhoods everywhere.

Before we explore that trimeth lab, a quick explanation: I’m wrapping up a series of posts from a great book entitled “Yes! 50 Scientifically Proven Ways to be Persuasive” by Robert Cialdini, Noah Goldstein, and Steve Martin. The information above (and expanded below) is a sample of simple but remarkably effective strategies that will make you much more persuasive at work and in your personal life.

Now – back to that trimeth lab.

The drug, known in the chemistry community as 1, 3, 7-trimethylxanthin, is more commonly known as caffeine, and these “trimeth labs” are more commonly 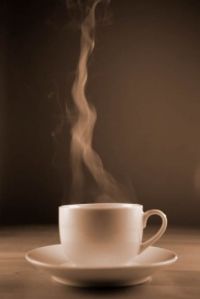 known as coffee shops. Be it Starbucks, McCafe, or your local favorite coffee-house, the beverage you get there is a potential tool of influence and persuasion. We all know that caffeine can make us feel more alert, but can it make us more persuasive?

To test coffee’s persuasive prowess, scientist Pearl Martin and her colleagues first asked all of their participants to drink a product resembling orange juice. Half of the research subjects had their drink spiked with caffeine – the approximate amount that you might find in two cups of espresso.

Shortly after drinking the juice, all participants read a series of messages containing very good arguments advocating a certain position on a controversial issue. Those who had consumed the caffeinated beverage before reading those arguments were 35 percent more favorably disposed toward that position than were those who drank the plain juice.

The researchers also tested the effect of caffeine when participants read messages containing weak arguments. The results showed that caffeine has little persuasive power under these circumstances.

Given a choice, the studies suggest that you should make presentations when people are most alert – shortly after they’ve had their morning coffee fix, and never right after lunch. If you can’t choose the time of day, having coffee or caffeinated tea or other drinks on hand should make your audience more receptive to your message. Be aware that it usually takes about forty minutes for the full effect of caffeine to kick in, so time your presentation well!

Remember, the research suggests that this strategy is effective only if your arguments are genuine, thoughtful, and well-reasoned. So pour yourself a cup of coffee and write, edit, and rewrite your next presentation till it is absolutely on point.

Then break out the coffee for your audience.

If you have enjoyed this post as an example of increasing your persuasion, check out the others in the series from Monday and Tuesday. I highly recommend the book as well. The stories and examples contained show that persuasion is not just an art, but has many elements of science to it as well.

One thought on “Using a Trimeth Lab to Boost Your Influence”