When you are leading out in new directions, and want to get group buy-in, there’s nothing like using the momentum of the bandwagon.

But remember: the person who asks others to “jump on” is critical.

In a wide-ranging study based on hotel guests buying in to the reusing of towels for more than one night, social scientists were able to increase the frequency of reuse by several different methods. In addition to the standard environmental protection appeal and the social proof appeal (guests in our hotel reused towels x% of the time), the study went one step further. 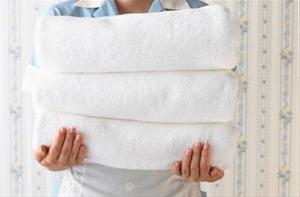 Using data collected from the housekeeping staff, some guests saw a simple sign informing them that the majority of people who had previously stayed in their particular room participated in the towel reuse program at some point in their stay.

Guests who learned that the majority of the prior occupants of their particular room had participated were even more likely to reuse their towels than guests who learned the norms of the hotel in general. Compared to the standard environmental appeal, there was a 33 percent increase in the likelihood of participation.

It’s usually beneficial for us to follow the behavioral norms associated with the particular environment, situation or circumstances that most closely match our own. The results of this experiment suggest that the more similar the person giving the testimonial is to the target audience, the more persuasive the message becomes.

Here’s the application: say you’re trying to persuade your team to willingly embrace a new system. You should ask for a positive testimonial from others within your group who have already agreed to make the switch. But what if you’ve got a really stubborn team member, maybe one who has the most invested in the old way? Don’t make the mistake of choosing the most eloquent team member to try to convince the holdout. Instead, look for someone to solicit the opinions of another coworker who most closely matches the situations and circumstances of the holdout – even if that particular person happens to be less articulate or popular.

It’s all about understanding the circumstances of those who are most comparable to your target audience.

The above information came from a great book entitled “Yes! 50 Scientifically Proven Ways to be Persuasive.” Authors Robert Cialdini, Noah Goldstein, and Steve Martin reveal simple but remarkably effective strategies that will make you much more persuasive at work and in your personal life.

As I prepare for a major presentation this fall, I will be looking at some of my favorite examples of persuasion from the book; here is yesterday’s post.

2 thoughts on “Jumping on the Bandwagon”