Pi Day is celebrated on March 14th (3/14) around the world. Pi (Greek letter “π”) is the symbol used in mathematics to represent a constant — the ratio of the circumference of a circle to its diameter — which is approximately 3.14159.

Pi has been calculated to over one trillion digits beyond its decimal point. As an irrational and transcendental number, it will continue infinitely without repetition or pattern. While only a handful of digits are needed for typical calculations, Pi’s infinite nature makes it a fun challenge to memorize, and to computationally calculate more and more digits.

The average sinuosity of a river (its length as the fish swims divided by its length as the crow flies) is pretty close to pi. Why? Water on the outside of the bend erodes the bank, while slow-moving water on the inside of the curve deposits silt. Eventually the shape morphs into a loop – until an overflow cuts off the detour, straightening the curve. Rinse and repeat. (from Wired magazine, by Matthew Hutson).

How much more geeky can you get than that?

Have a piece of Pi! 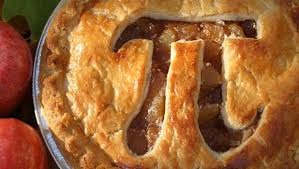