The best meal imaginable starts with the basics – and the most basic culinary technique is making a stock.

Even before two of my sons became immersed in the heat of the culinary world (one a kitchen manager for a national chain, the other the chef of a retreat and conference center), I have long had a fascination with everything that goes into making an amazing meal.

When I began researching the culinary world several years ago, the importance of a “stock” to the rest of the meal was made early and often. Generally made of a few simple ingredients, a stock in the hands of a gifted chef can turn into dozens of variations, each becoming something greater than it began.

The creation of tantalizing sauces is often the next step beyond the creation of basic stocks by a chef. But sauces aren’t limited to the kitchen: over the last few years, many different uses of sauce outside the kitchen have appeared: secret sauce, awesome sauce, special sauce, etc.

Chip Bell, author, consultant, and keynote speaker known for his service innovation practices, released a book earlier this year entitled Sprinkles. As you might guess from the title, Bell uses language and examples from the culinary world to focus on providing “that surprise that takes service from great to awesome.”

Like a sauce takes basic ingredients and makes a mouth-watering, memorable meal.

When the book was released, I wrote a review that introduced the heart of the book: Bell’s Nine Secret Sauces. In this post and the following two, I would like to go a little deeper into these sauces and particularly how they can be applied in the setting of Guest Experiences in the church.

Amazement can be defined as “a feeling of great surprise or wonder.” When Guests come to your church, they are probably expecting several things, one of which is to be made welcome. Because today’s church Guests live in a consumeristic world, they often expect more than just a normal greeting; anything less is a negative.

The secret sauce of Amazement takes the welcome concept to a whole new level. To differentiate yourself from your competition (which isn’t other churches, by the way), how can you amaze your Guest? What will you say, do, and/or provide that takes away your Guest’s breath, capturing their attention and ruining their appetite for your completion?

Animation can be defined as “ the state of being full of life or vigor; liveliness.” Guests coming to your church will be frustrated by indifference. They spend enough of their day at work or other places encountering boring, comatose service. Surely it will be different at a church?

The secret sauce of Animation is present when your team members are alive and spirited. They anticipate Guests, eagerly welcome them, and leave the Guest’s energy level higher than they found it. What does your organization do to instill and inspire in your teams so that they are full of life?

Abundance can be defined as “a very large quantity of something.” Who isn’t surprised and delighted when receiving a little something “extra”?

The secret sauce of Abundance is demonstrated by the generous attitude your team presents to Guests. Almost magnetic, it attracts Guests because it conveys an unconditional positive regard. How are you developing your teams to go beyond the expected with a generous spirit and attitude?

Next Up: Ambiance, Adoration, and Allegiance 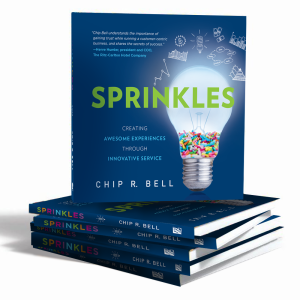