Following the Civil War, economic recovery and expansion in the United States was to a large part driven by the expansion of the railroad system.

From its infancy in the 1830s through the 1870s, railroad systems developed piecemeal within the borders of each state. Everything from locomotive size to railcar layout to schedules to fares was developed only with a mind to serve a limited scope – usually measured in tens of miles, occasionally getting up into the hundreds of miles. Nowhere was this more glaring than the rail gauge, or distance between rails.

Facing a tremendous rebuilding effort, with grand schemes of expansion beyond that, the independent railroad systems of the mid-1880s realized that it would be better to serve national, rather than local, interests. The idea that it was better for a railroad to have a separate gauge from its local rivals had become redundant.

Cooperation rather than confrontation was now the watchword.

After decades of incessant fighting, railroad companies realized that railroads work best as an integrated system; the longer that passengers and freight can travel without changing trains, the better the service. 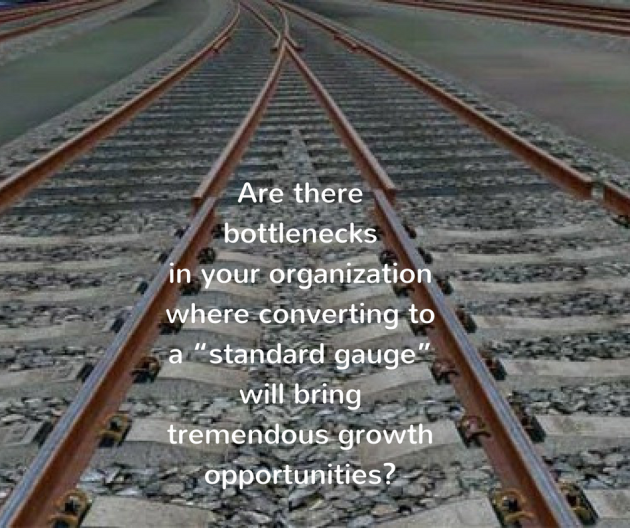 Large gangs of track workers moved one of the rails on 13,000 miles of track. The operation – staggering in its scope – also required converting 1,800 locomotives and 40,000 coaches. Up until this time, trains heading in and out of the South had been subject of delays as their cars were lifted by hoists and attached to wheel sets of the right gauge.

The efforts of tens of thousands of workers over a momentous thirty-six-hour period on May 31-June 1, 1886 created – at last – a unified railroad for almost the whole United States.

Are there bottlenecks in your organization where converting to a “standard gauge” will bring tremendous growth opportunities?

Background material from The Great Railroad Revolution by Christian Wolmar