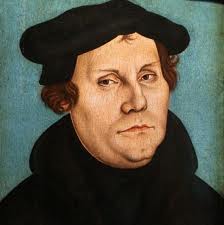 On October 31, 1517, Luther posted 95 theses on the door of the Castle Church in Wittenberg, Germany – and launched the Protestant Reformation.

For a brief backstory, go here.

The 95 theses contained Luther’s opinions of what was going wrong in the Catholic church. Excommunicated from the church and condemned to die, Luther was given protection by Prince Frederick of Germany. For the next 10 years,he worked on another task we should thank him for – the translation of the Bible from Latin (which only a few learned men could read) to German – the language of the people.

Others soon took up the cause, and the “protest” spread to other nations outside of Germany. Soon a new church was spreading across Europe – and the world, changing not only the religious landscape but all civilization as well.

Now almost 500 years later, look how far we have come.

So much good, and yet…