When process is king, ideas will never be. It takes only Common Sense to recognize that the more layers you add to a process, the more watered down the final work will become.

Ken Segall was the creative director at several ad agencies, working for big-name tech companies like IBM, Intel, and Dell. However, it was his work 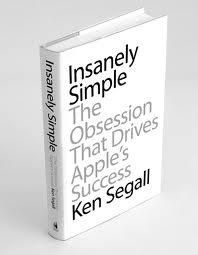 with Apple over a period of years that gives him a unique perspective of the stark contrast of Apple’s ways that made him appreciate the power of Simplicity. Segall recently released a book about these lessons – Insanely Simple. More than just another repetition of Apple lore, it chronicles an outsider’s long relationship with Apple and Steve Jobs that will provide leaders in any organization with the powerful tools of Simplicity.

While working with Apple, Segall often experienced the strict enforcement of one of Simplicity’s most important rules: Start with small groups of smart people – and keep them small. Every time the body count in a meeting or working on a project goes higher, you’re simply inviting Complexity to take a seat at the table.

This small-group principle is a key to Apple’s ongoing success and key to any organization that wants to nurture quality thinking. The idea is pretty basic: Everyone in the room should be there for a reason. Segall distilled years of observing and practicing this idea down into two “Laws of Small.”

The quality of work resulting from a project is inversely proportional to the number of people involved in the project.

The quality of work resulting from a project increases in direct proportion to the degree of involvement by the ultimate decision maker.

To even speak of putting process before creativity did not happen in an environment like Apple’s. A better idea is a better idea – no matter where it fell in the process. The high value placed on ideas is one of the things that Steve Jobs burned into the Apple culture and it will likely continue to guide the company into the future.

How would small groups of smart people work in your organization?